Everton have made former Leeds boss Marcelo Bielsa their first choice to become the club’s next manager after sacking Frank Lampard on Monday.

Bielsa, who has been out of work since he left Leeds in February last year, has already held talks with the club’s hierarchy about taking over and has indicated his willingness to take on the job. The Toffees’ next game is not until February 4, when Arsenal visit Goodison Park.

The Argentine was in talks to succeed Scott Parker as Bournemouth manager before the World Cup, but the role was ultimately given to caretaker boss Gary O’Neil instead.

The Toffees’ approach to Bielsa follows their dismissal of Lampard on Monday afternoon, on the back of a 2-0 defeat by West Ham at the London Stadium on Saturday – their third consecutive loss in the league.

The former Chelsea boss arrived at Goodison Park in January 2022, and although he helped the club avoid the drop last season, he leaves Everton with 15 points from 20 games and three wins this term – the worst victory record in the division. Everton are 19th in the table, with only Southampton below them on goal difference.

An Everton statement said: “Everyone at Everton would like to thank Frank and his coaching staff for their service during what has been a challenging 12 months.

“Frank and his team’s commitment and dedication have been exemplary throughout their time at the club, but recent results and the current league position meant this difficult decision had to be taken. We wish Frank and all his backroom team well for their future in the game.

“The club has started the process to secure a new manager and will provide updates on the appointment in due course.”

Joe Edwards, Paul Clement, Ashley Cole and Chris Jones have also left the club. Paul Tait and Leighton Baines will take training until a new manager is appointed, while Alan Kelly will remain as goalkeeping coach.

Bielsa guided Leeds back to the Premier League in 2020 after a 16-year absence and led them to a ninth-placed finish in their first season in the top division before he left the club midway through the 2021/22 season with the club just outside the relegation zone.

The 67-year-old has been cited by colleagues, including Pep Guardiola and Mauricio Pochettino, as one of the world’s best coaches, and has been credited with the success of a number of Leeds players, including Patrick Bamford and England midfielder Kalvin Phillips.

Sky Sports News chief reporter Kaveh Solhekol has been told former Burnley boss Sean Dyche is also among the candidates to take the reins at Everton, who are are also big admirers of Brentford’s Thomas Frank, but are unsure if he can be convinced to join them.

FREE TO WATCH: Highlights from West Ham’s win against Everton in the Premier League – Lampard’s final match in charge

Speaking to Sky Sports News after Everton’s weekend defeat in London, Moshiri said “it’s not my decision” when asked if Lampard’s time was up, while the head coach insisted he remained focused on the challenge at hand in his final post-match interview.

“It’s my job to work and focus and keep my head down,” Lampard told Sky Sports. “I’ve got absolute confidence in how I want to coach. And if they are difficult conditions at the minute, for a lot of different reasons that I’m very aware of, then that’s it. I just have to do my job and it’s not for me to make too many diversions around it rather than talk about what I can affect and that’s the players, trying to get the right results.”

Sky Sports pundit Paul Merson told Soccer Saturday that he did not believe Lampard had lost the commitment of the players – but questioned the quality of the players at Lampard’s disposal.

“They’re not not trying for Lampard, it’s nothing to do with that,” said Merson. “Sometimes you look at players and think, ‘they’re just waiting for the manager to go and then they’ll start running around again’. They work hard. But they’re just not up to it at the moment.

“They keep on losing to all the teams around them, that’s the worry. They’ve lost to Wolves, Southampton and West Ham in three of their last five games.”

Who could take over at Goodison Park?

“There are a lot of managers in the game at the moment who wouldn’t want to go to Everton because of the size of the task and the damage it could do to their reputation if they were to go there and it didn’t work out.

“The club are talking to a number of candidates. People like Marcelo Bielsa, who has been mentioned. Sean Dyche is someone Everton like a lot. I don’t know if he would want to take on a job the size of Everton. Another name mentioned to me is Thomas Frank, the Brentford manager. 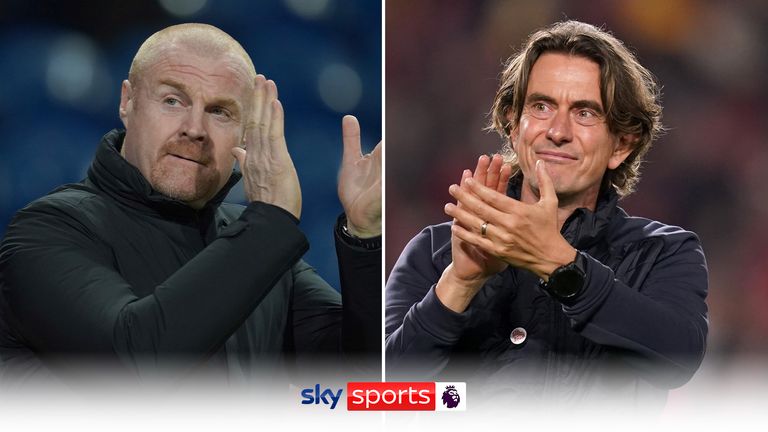 Sky Sports chief reporter Kaveh Solhekol has been told Sean Dyche is among candidates to take the Everton job, and that the club are also big admirers of Thomas Frank

“I’ve been told there are people at Everton who are big admirers of him, but people at the club aren’t sure if he would be happy to leave Brentford and work for Everton.

“One thing mentioned to me is that Everton may look to someone until the end of the season, on an interim basis. Because they just need someone to go in there and keep them up.

“A lot of the time when you see managers sacked, the club already have someone else lined up. But is it them talking to a number of candidates because they haven’t made up their mind, or because the people they’re talking to need some convincing to come to Goodison Park?

“Ultimately, Farhad Moshiri will be the man to make that final decision.”

Jamie Carragher believes Everton have become an ‘easy touch’ to play against in the Premier League. Also, in his opinion, the Toffees are the ‘worst-run club in the country’

“Nobody knows a football club better than their own supporters. There were no banners against Frank Lampard, they were against Farhad Moshiri and the board. I have said Everton are the worst-run club in the country. That wasn’t a flippant remark as an ex-Liverpool player, I’m saying it as an ex-Everton fan.

“When I made that comment, Everton got in touch with me and I admired it, being on the front foot to defend your club. But I didn’t think I was wrong then and I’m not wrong now. Moshiri doesn’t know what he’s doing but he’s got a lot of money.

“The same sorts of players are getting brought in, managers are getting changed left, right and centre. Why does every Everton manager fail? Lampard, Champions League-winning managers like Benitez and Ancelotti, Silva, Koeman has been around the world. So when a club fails, you have to look at the top. It’s a mess.”

‘A change needed to be made’

“There were painful defeats at home to Wolves and Southampton, fellow strugglers around Everton in the table. The fact that they weren’t able to get maximum points from those games set alarm bells ringing at the club.

“The Crystal Palace game in October was highlighted as the blueprint of how Everton want to play but they’ve not been able to repeat that kind of form since then. One bright spot was the equaliser from Demarai Gray against Manchester City at the Etihad.

“Everton are not getting a return on the over £500m they’ve invested in recruitment. Richarlison was sold in the summer and the replacements have not been at the same level.

“When Lampard came in, there was a lot of respect for him from the Evertonians and the media here on Merseyside because of how he dealt with things and that they were successful in beating relegation last season. Everton have not been able to build on that and find themselves in another relegation battle.

“The fans will say a change is needed to be made to give Everton the best opportunity to stay in the Premier League.”

“The inevitable has happened today.

“I backed Frank Lampard but ultimately, it’s about results and I think the club had to make the move, which some will agree with, some won’t.

“Sitting second bottom, the club find themselves in a very difficult situation, the club’s a bit toxic at the moment so they’ve got to do something to address the situation, the slide in where the club is at.

“Everton shouldn’t be where they are. They should be around the mid-table, minimum. But, when you don’t back the manager and virtually, it’s just the same players that have got you into difficult situations over the past few seasons, it makes life so much more difficult for a young manager.

“Whether you’re a young manager, learning your trade or an experienced manager, it seems to not make any difference – there’s just no plan.”