Manchester United manager Marc Skinner has expressed his confidence that the women’s team will remain a “key focus” if the club changes ownership.

United, owned by the Glazer family since 2005, in November released a statement announcing the board were to “consider all strategic alternatives, including new investment into the club, a sale, or other transactions involving the company”.

And on Tuesday Sir Jim Ratcliffe, one of the UK’s wealthiest men, entered the race to buy the Red Devils, with his firm INEOS saying “we have formally put ourselves into the process”.

Skinner was asked at a press conference on Wednesday if the women’s side had had any reassurances that the team will continue to be backed whatever happens with the ownership.

And he said: “I can only really comment on the actions I see every day and the reality is we’re looking at investment and growth, we’re not looking at standing still right now.

“Even in this window, we’re trying to look at the potential of bringing players in. It’s not standing still.

“I don’t know about the ownership and what we do excellently here is they give you the information you need to know, so for us, there’s no distractions, we work hard on the field.

“And I have no doubt whatsoever that if our club does change hands in the future, the women will be a key focus of what we’re doing in the future as well at this club. We’ve just come way too far to turn around now.

“From all the conversations I have, it’s always about how we progress, it’s never about how we move backwards. So I would see that as a positive, regardless of what happens to ownership, we’re moving right now into a positive direction too.

“I am absolutely comfortable in understanding that we’re part of the club’s big plans going forwards.” 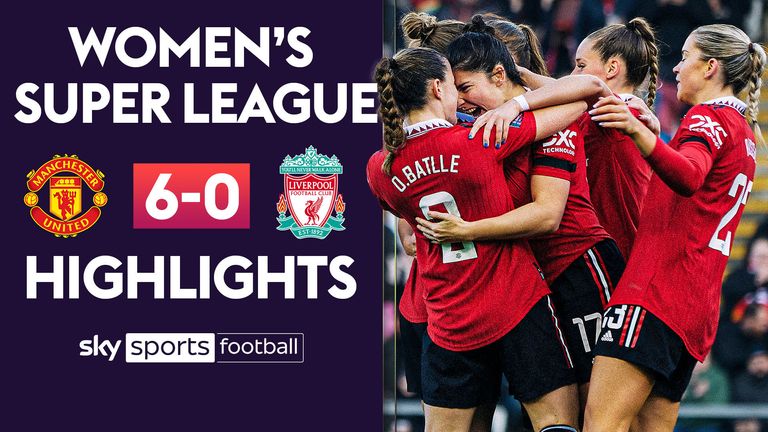 Highlights of the Women’s Super League match between Manchester United and Liverpool.

Skinner: ‘There have been conversations about my future’

United launched a new women’s side in 2018, have finished fourth in the Women’s Super League for the last three seasons and are currently second – three points behind leaders Chelsea with a game in hand.

Skinner was appointed as manager in the summer of 2021, signing a two-year deal with the option for a further year.

And the 39-year-old, whose side play Reading away on Sunday, says there have been conversations about his future.

“The whole reason we signed the option is because that’s in the club’s prerogative to do that,” Skinner added. “There are conversations of course, but if you know me, I’m very simple and very straight to what I want to do, which is win here.

“So I’m hoping that the qualities we’re putting out on the field, the consistency, the clean sheets, the goals, the way we perform, the fan growth, hopefully there are a lot of indicators as to why we should be here for a long time.

“But I’m really easy on that, I trust the club wholeheartedly, I trust everything we do here. It’s not about me, it’s about this team, it’s about us being focused about what we’ve got to do, which is perform against Reading and try to take another win.”