Michael Olise’s sensational stoppage-time free-kick rescued a 1-1 draw for Crystal Palace against Manchester United as Erik ten Hag’s side missed the chance to go second in the Premier League.

United appeared to be heading for a sixth consecutive Premier League win thanks to Bruno Fernandes’ goal before half-time, but Olise salvaged a point in dramatic style, his curling set-piece crashing in off the underside of the bar in the 91st minute.

David de Gea had kept Palace at bay before that, the United goalkeeper making outstanding saves from Odsonne Edouard and Marc Guehi, but he couldn’t do anything about Olise’s stunning effort as United spurned the opportunity to close the gap to Arsenal to six points.

For United, the result was compounded by a booking for Casemiro, his fifth of the season, which means the key midfielder will be suspended for Sunday’s crucial showdown with Arsenal, live on Sky Sports.

The draw keeps United in third place, eight points behind Arsenal, but comes as a major boost to 12th-placed Palace, who had lost five of their previous six games in all competitions. 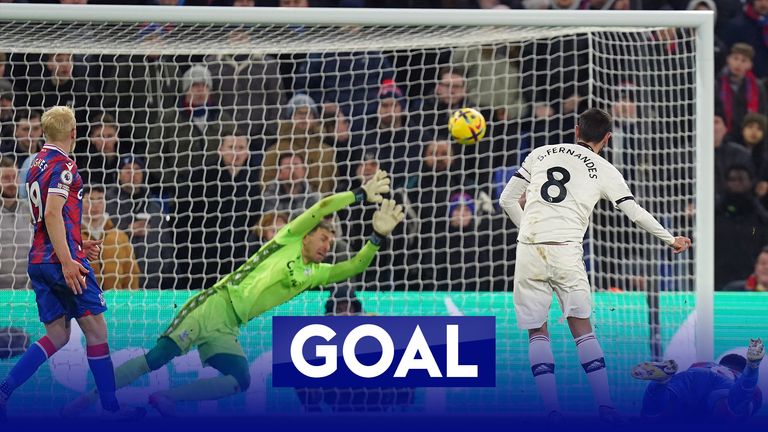 Fernandes gave Man Utd the lead with a composed finish Player of the match: Bruno Fernandes

A day on from Sir Jim Ratcliffe, the billionaire owner of chemical group INEOS, entering the bidding to buy the club, United hoped to show why they are becoming an increasingly-attractive proposition on the pitch as well as off it.

But they had to work for their chances from the start at Selhurst Park, with Palace defending stubbornly against a side seeking a 10th consecutive win in all competitions.

Luke Shaw, back at left-back with Lisandro Martinez returning in central defence, was first to go close, firing wide from an angle, with Antony then looping another effort past the same post.

Wout Weghorst, making his debut up front following his arrival on loan from Burnley, headed a half-chance narrowly over and Marcus Rashford fired wide from a free-kick, but United were indebted to De Gea for keeping it level when he brilliantly tipped Edouard’s shot onto the top of the bar.

Up at the other end, their breakthrough arrived less than four minutes after those heroics, Fernandes escaping the attention of Cheick Doucoure after Eriksen had breezed through Palace’s defence, then thumping home the Dane’s cut-back.

The timing was a blow to Palace, coming so close to half-time, and even more so given United had won all 10 of the previous games under Erik ten Hag in which they had scored first, but they continued to defend well after the break and improved offensively too.

United remained a threat on the break, with Rashford and Antony firing over, but Palace soon started ramping up the pressure, with De Gea forced into a reflex save from Guehi following a corner. Casemiro chops down Zaha and will now miss Sunday’s crunch match at Arsenal.

United thought they should have had a penalty after substitute Scott McTominay went down after a through-ball from Fernandes, but a VAR check upheld the referee’s decision to wave away their appeals.

Casemiro’s booking, for a clumsy foul on Wilfried Zaha, came soon after that, and things went from bad to worse for United when Palace scored their stunning leveller.

That wasn’t the end of the action, however, with Casemiro failing to convert from close-range and United then needing Aaron Wan-Bissaka to make a brilliant last-ditch tackle to prevent Wilfried Zaha from scoring a Palace.

‘Moment of madness from Casemiro’

“We spoke before the game about Casemiro. Don’t get booked. Don’t get into any confrontations. It was so important because they need him on Sunday.

“When he got booked in the 80th minute, it was like the steam was completely taken out of Manchester United. It affected them so much. They knew that their most important player, in that defensive role, was missing.

“It was a moment of madness. You could see Casemiro was furious with Bruno Fernandes, who jumped out of a challenge. That’s why he ends up one-on-one with Zaha and he gets booked.

“It could have been a red card. It’s a scandalous challenge. It’s reckless.

“I could just see Mikel Arteta when that happened dancing around his living room because he is so important to Man Utd. They have got no one who can do what he does in the team.

“I think he’s one of the most important players in the Premier League. They are going to miss him so much. It’s big news for Arsenal.”

Man Utd’s next outing is a vital Premier League fixture away at Arsenal on Sunday, live on Sky Sports – kick-off 4.30pm.

Meanwhile, Crystal Palace’s next game is a Premier League match at Selhurst Park against Newcastle on Saturday, live on Sky Sports – kick-off 5.30pm.