Top seed Iga Swiatek became the first player into the third round at a soggy Australian Open as Jessica Pegula paid tribute to Buffalo Bills’ Damar Hamlin after her win.

Swiatek put her first-round struggles behind her as she eased past Camila Osorio at the Australian Open.

The world No 1 had to fight back from 5-3 down in the second set against Jule Niemeier on Monday but was much more comfortable in her 6-2 6-3 success against Colombian Osorio to reach round three.

The negative for the Pole was that her serve was broken three times, including when she served for the match at 5-1 in the second set, but she took her next opportunity.

Swiatek said there was no escaping the pressure of being ranked No 1 after the 21-year-old inherited the top ranking when Ashleigh Barty retired shortly after winning last year’s Australian Open.

“It’s not easy because with that number the expectations are a little bit higher from outside, but also for myself a little bit,” she said.

“I’m trying to manage that properly. Also trying to kind of stay in my bubble during the tournament so I’m not going to get distracted by all of that.

“I don’t want people to take for granted that if you’re world No 1 that you’re going to win everything because we still have to fight for every match.”

The match was played under the roof on Rod Laver Arena because of rainy conditions at Melbourne Park that threatened to cause scheduling problems for organisers after Tuesday’s extreme heat and storms.

American third seed Pegula came through against Aliaksandra Sasnovich 6-2 7-6 (7-5) to join Swiatek in the next round.

Pegula played with the number three on her skirt in support of Buffalo Bills safety Damar Hamlin, who was discharged from hospital nine days after suffering a cardiac arrest during an NFL game.

“He’s recovered, it’s amazing and awesome to see,” said Pegula, whose parents own the Bills franchise.

She later said: “I definitely wanted to do something on my outfit. I was in Sydney when it happened so I didn’t have time to do it there.

“I thought it would be a fun way to connect with the team and then also just show my support. I felt like it was a global event. A lot of people were asking me about it even here.” 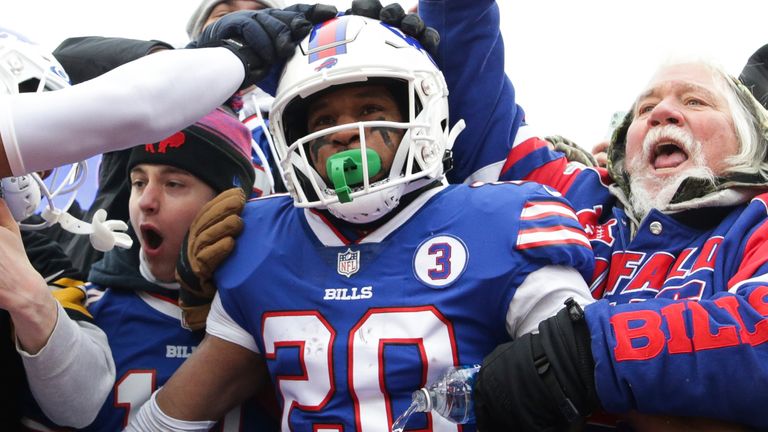 Ukraine’s Anhelina Kalinina upset 2019 finalist Petra Kvitova 7-5 6-4 on John Cain Arena to reach the third round of a Grand Slam for the first time.

Czech 15th seed Kvitova hit 37 winners but made 41 unforced errors as she became the first top-20 women’s seed to exit the tournament.

Sakkari said: “It was extremely tough. There were moments in the match where I thought I was going to lose, but then my belief somehow woke me up. She was playing with nothing to lose, she was playing very, very good. I’m glad I found a way to win.”

“She played an amazing match, she’s very young and promising. Maybe she could consider not going to college and turning pro,” Sakkari added with a smile.