Former world No 1 Andy Murray expressed his pride after rolling back the years with an epic five-set win over Matteo Berrettini in the first round of the Australian Open, saying he needed to give himself “some credit”.

“I’ve lost a few of those type of matches in the slams the last couple years, whether that’s the (Stefanos) Tsitsipas match (at the US Open in 2021) or (John) Isner at Wimbledon. That one could have gone the other way tonight, but I stayed strong and I deserved to win”

While such matches would have usually been contested in later rounds in his heyday, this victory meant almost as much four years after the tearful press conference at Melbourne Park that seemed to herald the end of his career.

Murray said: “The last few years, I’ve certainly questioned myself at times. There’s certainly a lot of people who’ve questioned me and my ability, whether I could still perform at the biggest events and the biggest matches.

“I felt very proud of myself after the match. That’s not something that I generally felt over the years at the end of tennis matches.

“I think I’m proud of the work that I put in the last few months. I trained really, really hard over in Florida getting ready to play here. I’m really proud of how I fought through that match at the end when it could have got away from me, how I played in the tie-break at the end.

“I was impressed with myself, which again is not something… I’m hard on myself usually. Tonight I need to give myself some credit because the last few years have been tough.

“I’ve lost a few of those type of matches in the slams the last couple years, whether that’s the (Stefanos) Tsitsipas match (at the US Open in 2021) or (John) Isner at Wimbledon. That one could have gone the other way tonight, but I stayed strong and I deserved to win.” 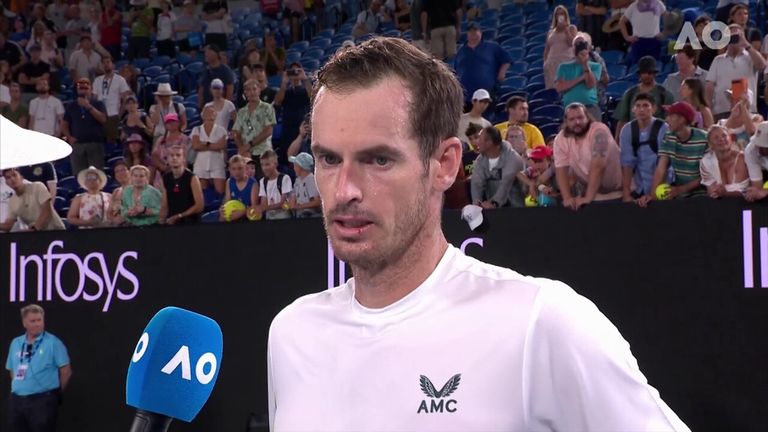 The former world No 1 spoke ahead of the match about how much better he was feeling about his game and fitness, and it was evident from the start that this was a different Murray to the player who has scrapped for wins since returning from hip surgery in 2019.

Recollecting his Florida trip, Murray explained his lifestyle and gruelling routine over a three-week period.

“We were in Boca Raton and I stayed in a house, which was maximum two-minute drive from the court that we practiced on every day there,” said Murray.

“I went with Ivan (Lendl) who was obviously there staying at home. The physio that I was working with was Phil Hayward, who was there with me for the whole three weeks. Hilts (coach Mark Hilton) came out for a couple of weeks of it as well.

“I did a lot of cardio work on the bike and on the Versaclimber. We just lived a pretty sort of basic life for those weeks spending two-and-a-half, three hours on the court, have lunch, then heading to the gym in the afternoon, or sometimes going back on the court again.

“I was totally focused on my training and on my tennis, the things I needed to do to get better.

“It’s something that I’ll definitely look to do at times during the rest of this year to make sure I dedicate enough time to the hard work and improving my game.”

The only time Andy Murray has lost a Grand Slam match after winning the first two sets (139 matches leading 2-0 including Berrettini) was against David Nalbandian at Wimbledon in 2005.

Murray’s opponent Berrettini admitted he struggled to adapt to the different conditions with the players only finding out just before taking the court that the roof would be closed due to extreme heat.

“I think he played definitely better. He was moving way better, hitting the ball better… everything, in general.

“He served really well. I knew it would have been a tough first round. He loves to play these kind of matches. He’s a great champion. Personally, it was great to play with that atmosphere against him. It was just a great match. Unfortunately, it didn’t go my way.”

Murray will play the winner of Australia’s Thanasi Kokkinakis and Italian veteran Fabio Fognini for a place in the third round.